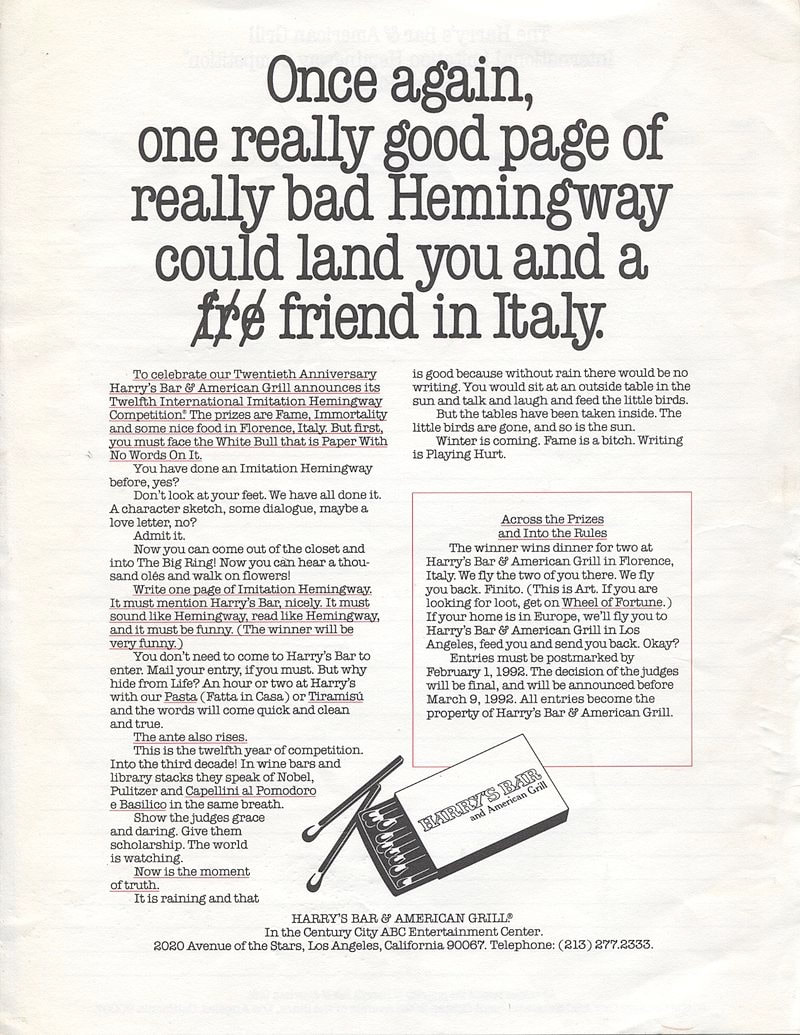 We were drinking at the bar in Harry’s when it exploded.
It was early morning and the sun was bright and painful and rising on the tall glass towers when the rocket exploded to announce the release of the bulls and so we all rushed out to see the big and brave and mature and viciously horny bulls toss the television executives as they came up the escalators.
Harry brought out light appetizers and the good champagne. I had the prosciutto, which lay very fine and lean on the plate and the melon was sweet and ripe and the flesh reminded you of a woman you had known. Perhaps you had not really known her and if she went tart on you then all you noticed was the ripeness and so you thump-thumped her and then perhaps you forgot about that business with the prosciutto.

“What the hell,” I muttered, as a Director of Development, Drama, sailed overhead.
They all came just like that.
A rogue six-year-old charged our table, endangering the Veuve Clicquot. I grabbed the bucket with my good hand and sighting along the other arm I thrust my thumb and forefinger into the animal’s wet, flaring nostrils, thereby controlling and fixing him in place.
“That is very rare, hombre.”
It was the hostess. The one they called Kay Buena.
“Clearly, daughter. But one finds the Steak Tartare less mature.”
Our waiter, who called himself Hugh Giatippe, lured the bull away with a tablecloth. Retreating fluidly through a series of chingaderas linked with a sweeping triple cambio de valvolina he led the beast into the elevator and sent him to Parking “B.”
Watching Hugh with the bull I could feel the old aflicción returning. 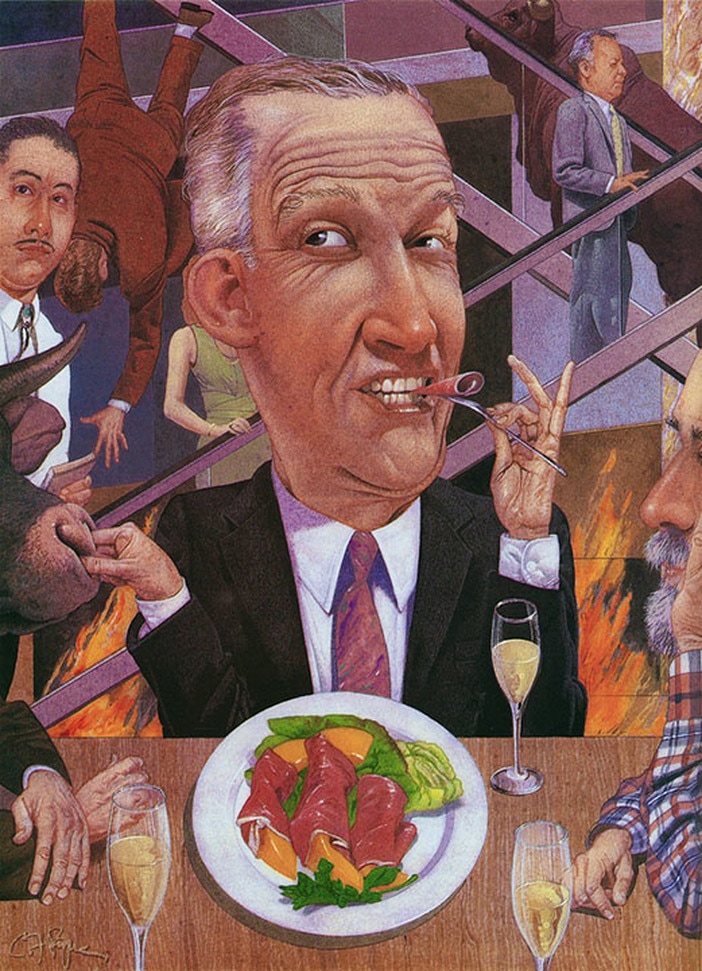 Illustration by C.F. Payne
“You are afliccionado as I am,” Don Prostatero had told me, touching my Pendleton. Always with the touching.
“Yes, truly. And tomorrow the men in the Armani will run from the bulls, only to be tossed as so much Insalata Cesare.”
“Yea, verily.”
Here was much touching.
“And those who sit themselves on the boards and vend the insurance will be tossed.”
“It is almost too swell to talk about.”
“And the attorneys—“
At this he clutched my pocket flap and he was staring at something far away and he seemed very old and defeated but the eyes were those of the phrenologist he once was.
“No!” he whispered. “They are too clever!”

“Sic transit justitia mundi,” old boy, I thought now, and looking across the table I saw her. I looked across the table and there she was. The one they call Muffy. She looked very ripe and she was very tight and very supine.
“Do say, old frog, have you seen my virginity?”
“One finds everything at Harry’s. And I’m a damned steer.”
“Well I’ve decided not to be a heifer anymore and I must say I feel rather corking good about it, so buy a girl a drink. Bung-o!” she said, her nostrils flaring and wet, nostrils that could break your, or anyone else’s heart.
What the hell, I thought. This time I used the good hand. She didn’t stop me.
“Dyat dyub dap dib,” she said.
“Truly,” I said, and I kissed her hard and long and true on her mouth and her neck and all the swell places and we felt the terrazzo tremble beneath our table.
“Darling!” she said. “A six-point-three! Oh, do let’s eat now, darling. Do let’s eat the radicchio.”
“Of course, devil,” I said. “It’s sort of what one has.”

If you are lucky enough to have eaten at Harry’s you know that Harry’s is always worth it, no matter with what difficulty, or ease, it can be reached, and the memory of each person who has eaten there differs from that of any other. But this is how it was at Harry’s in the early days, when we were very ripe, and very tight, and very sappy.
​
–The End–
KNX Radio interview with contest judge Ray Bradbury: 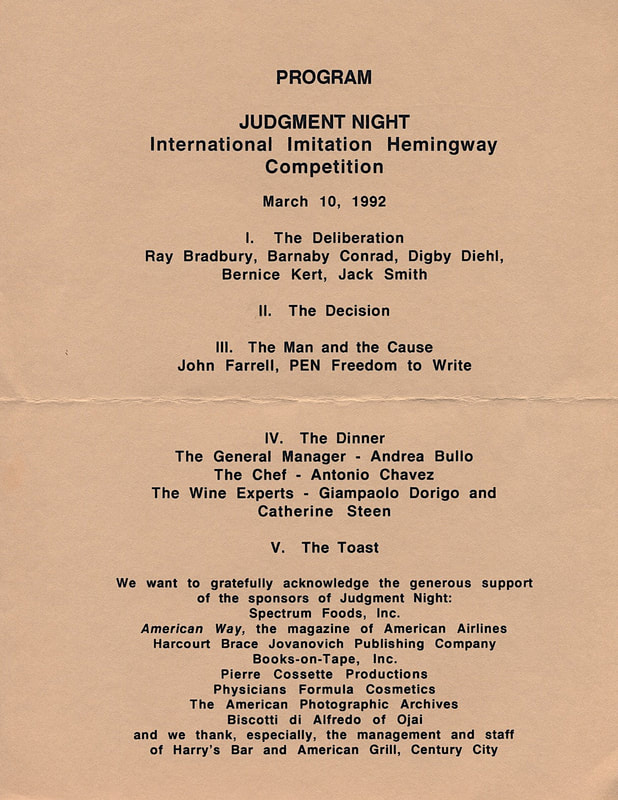 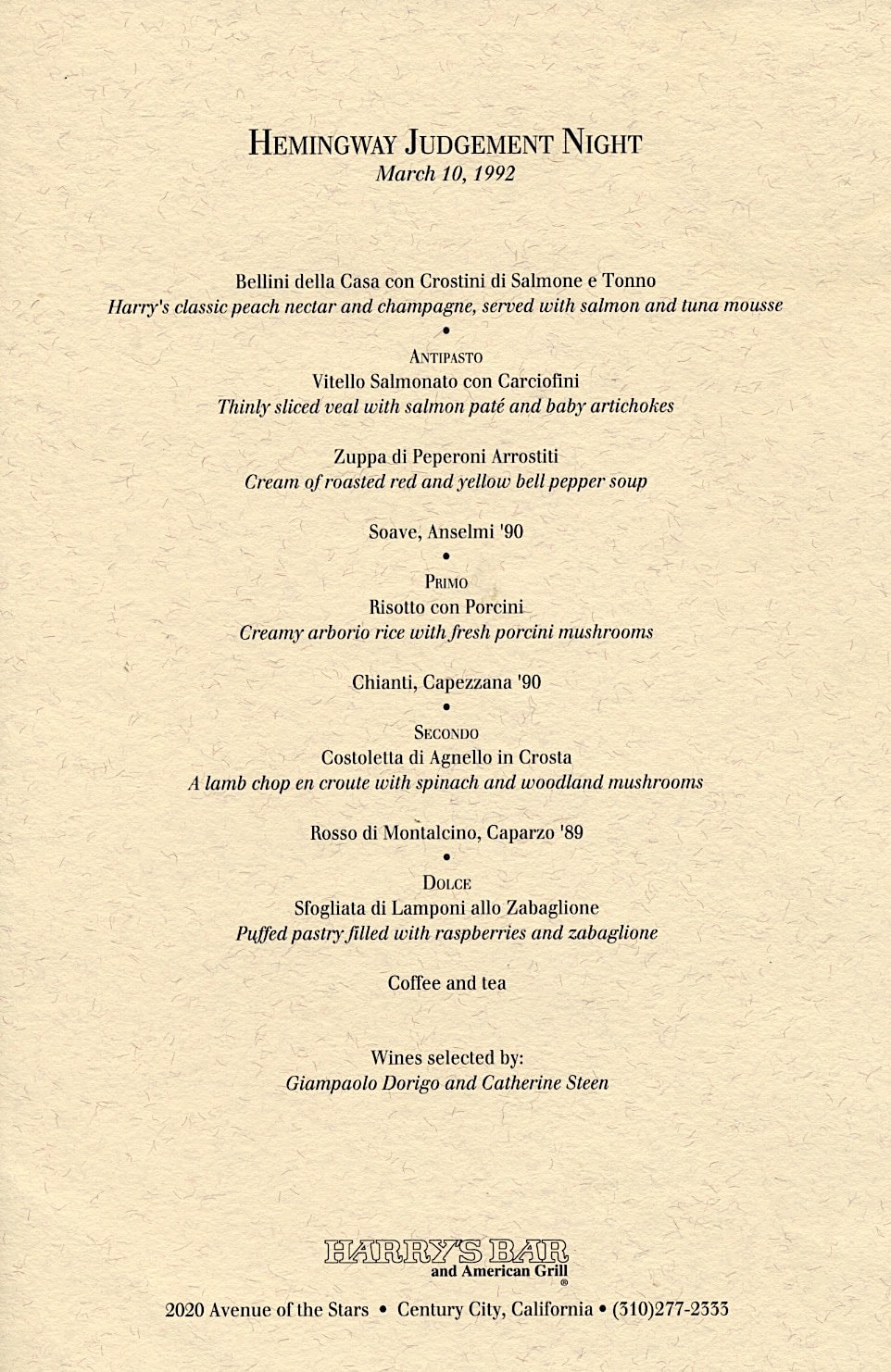 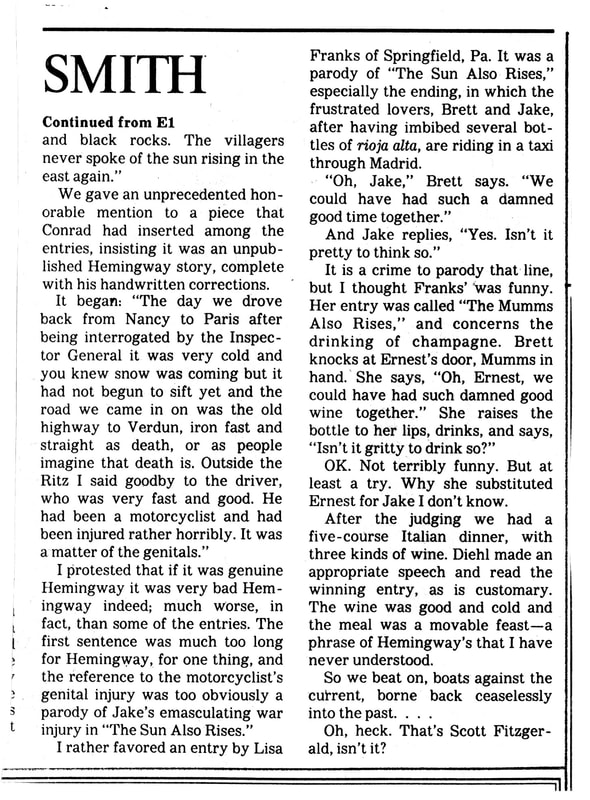 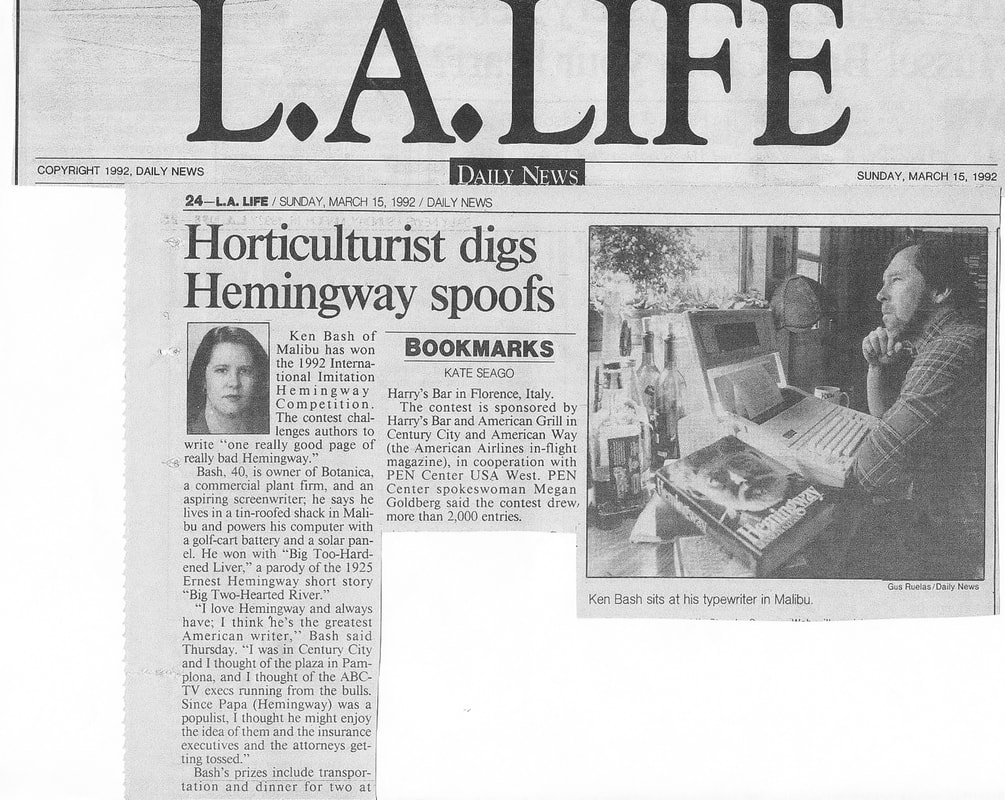 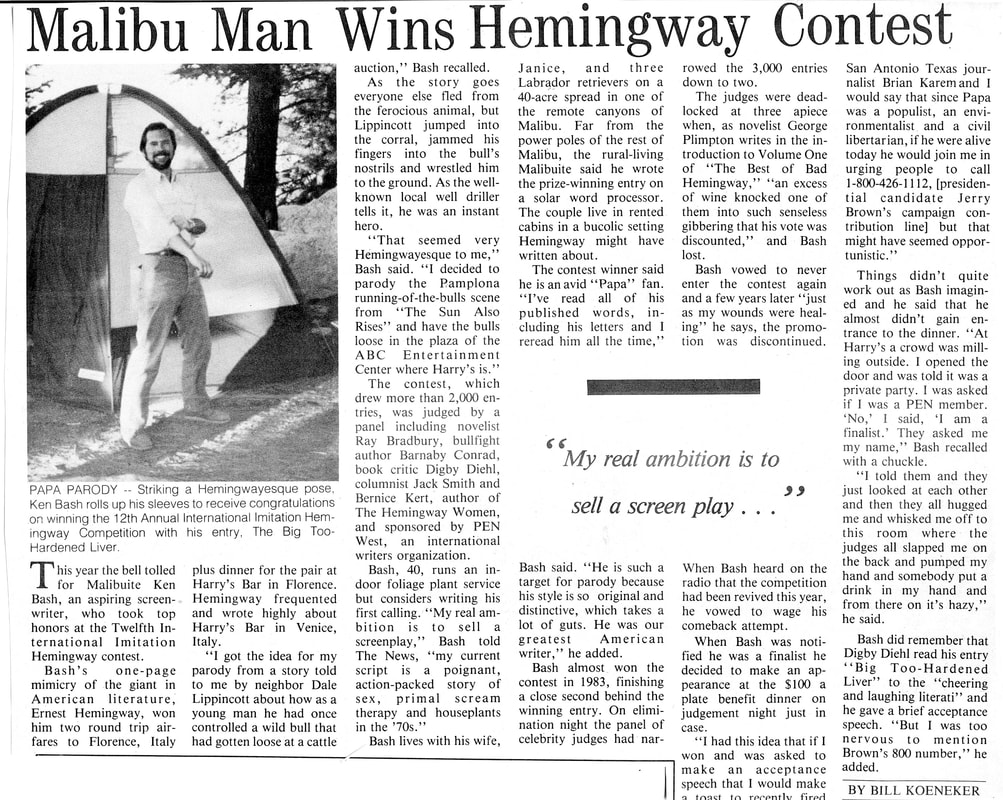 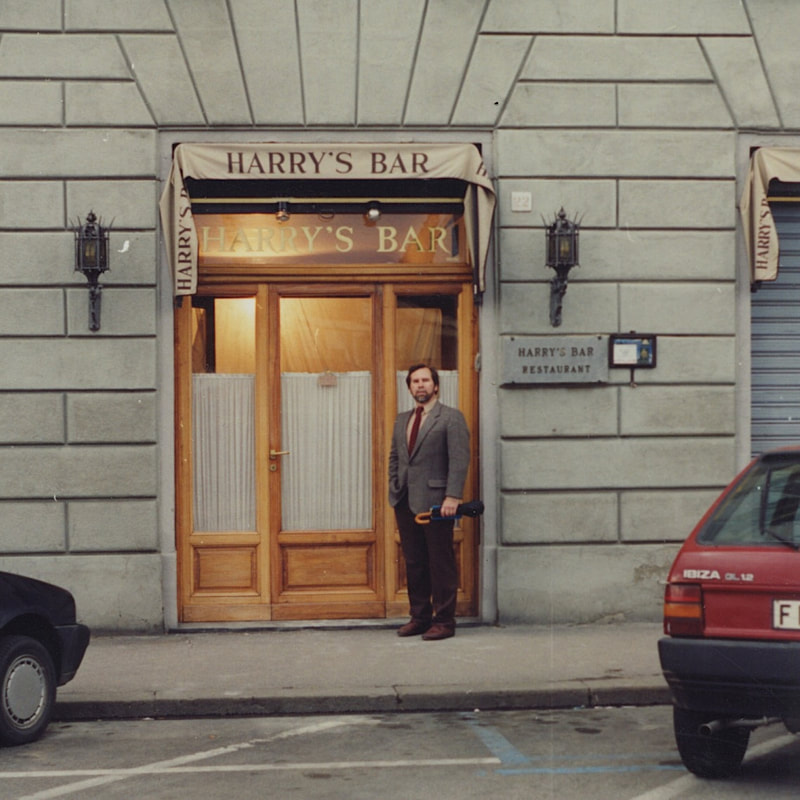 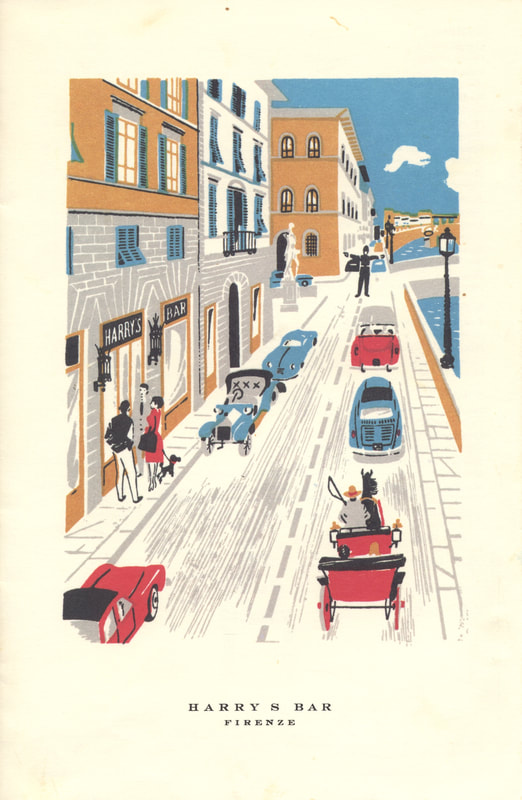 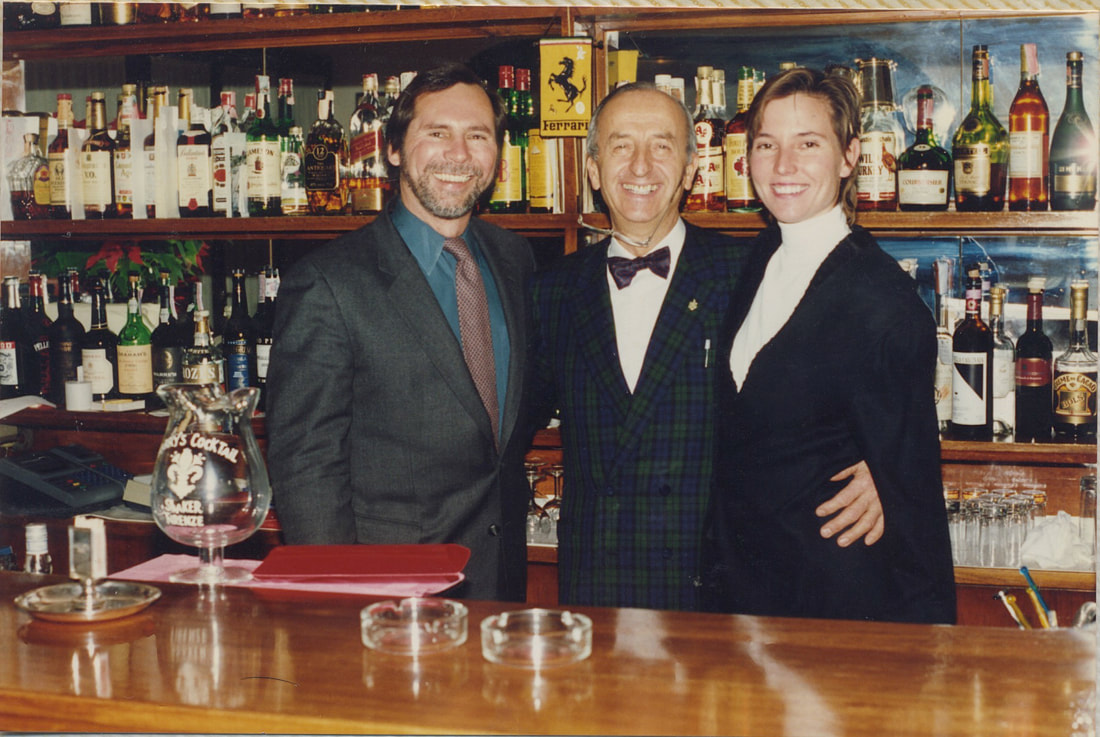 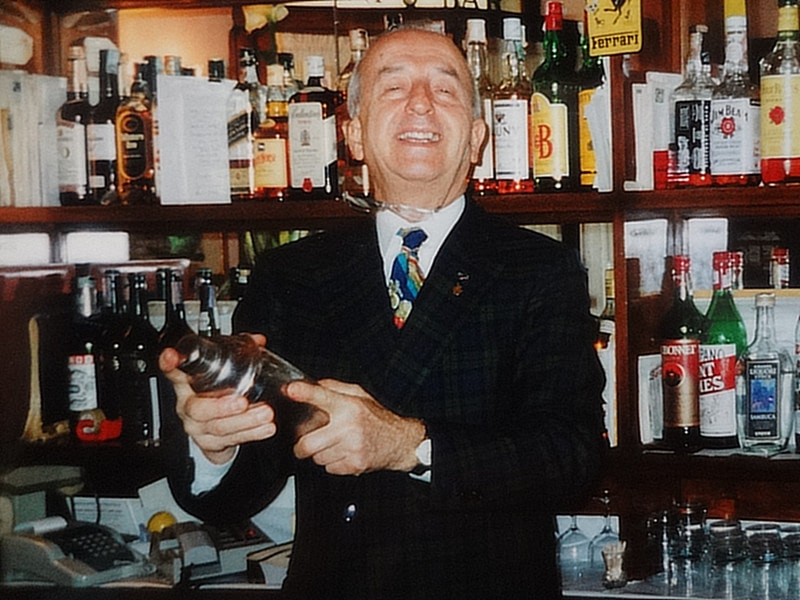 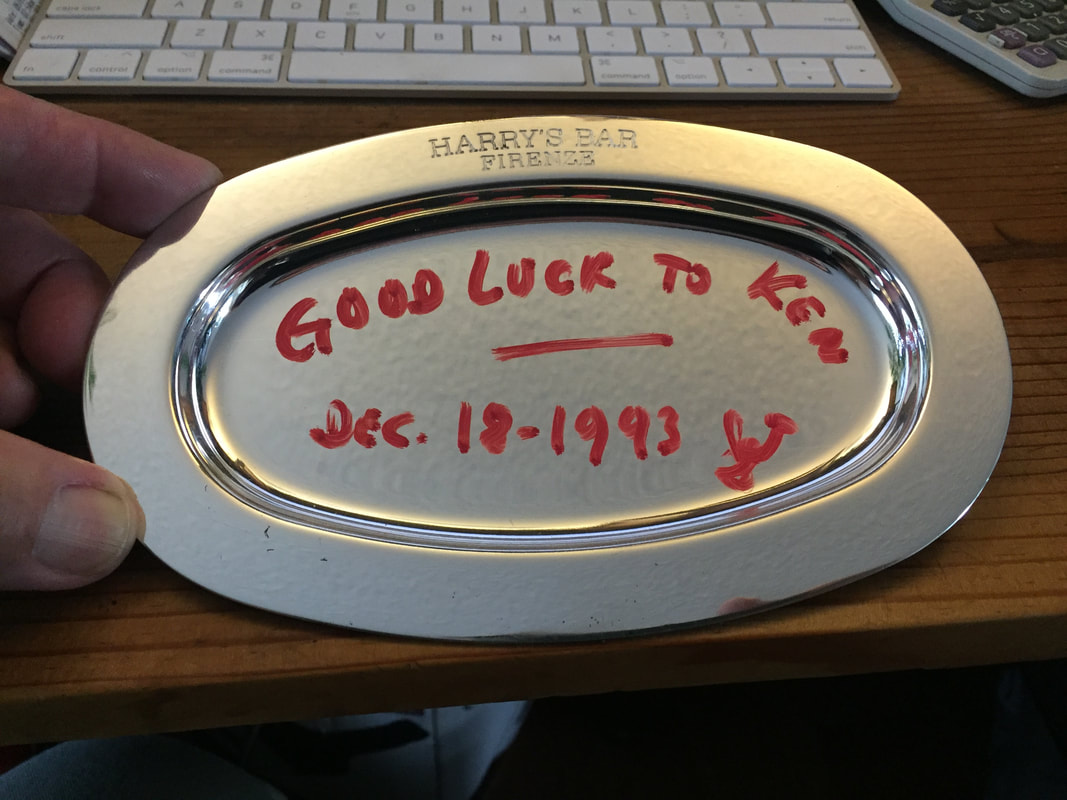 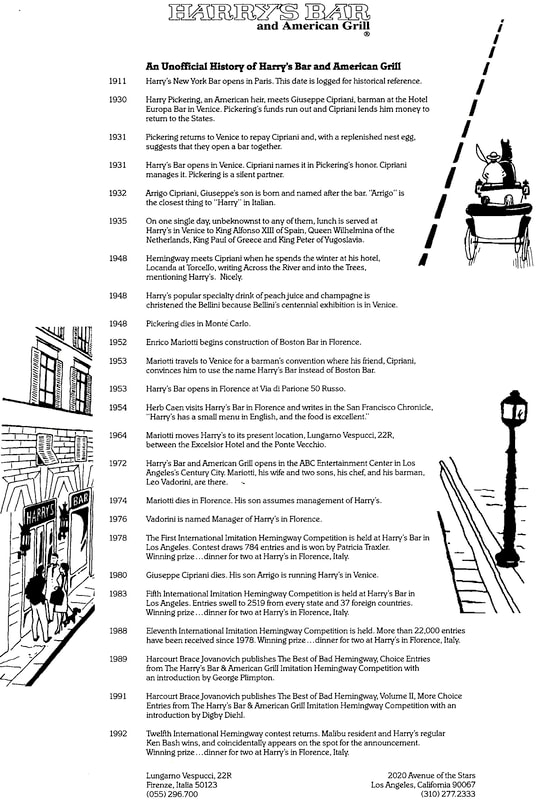 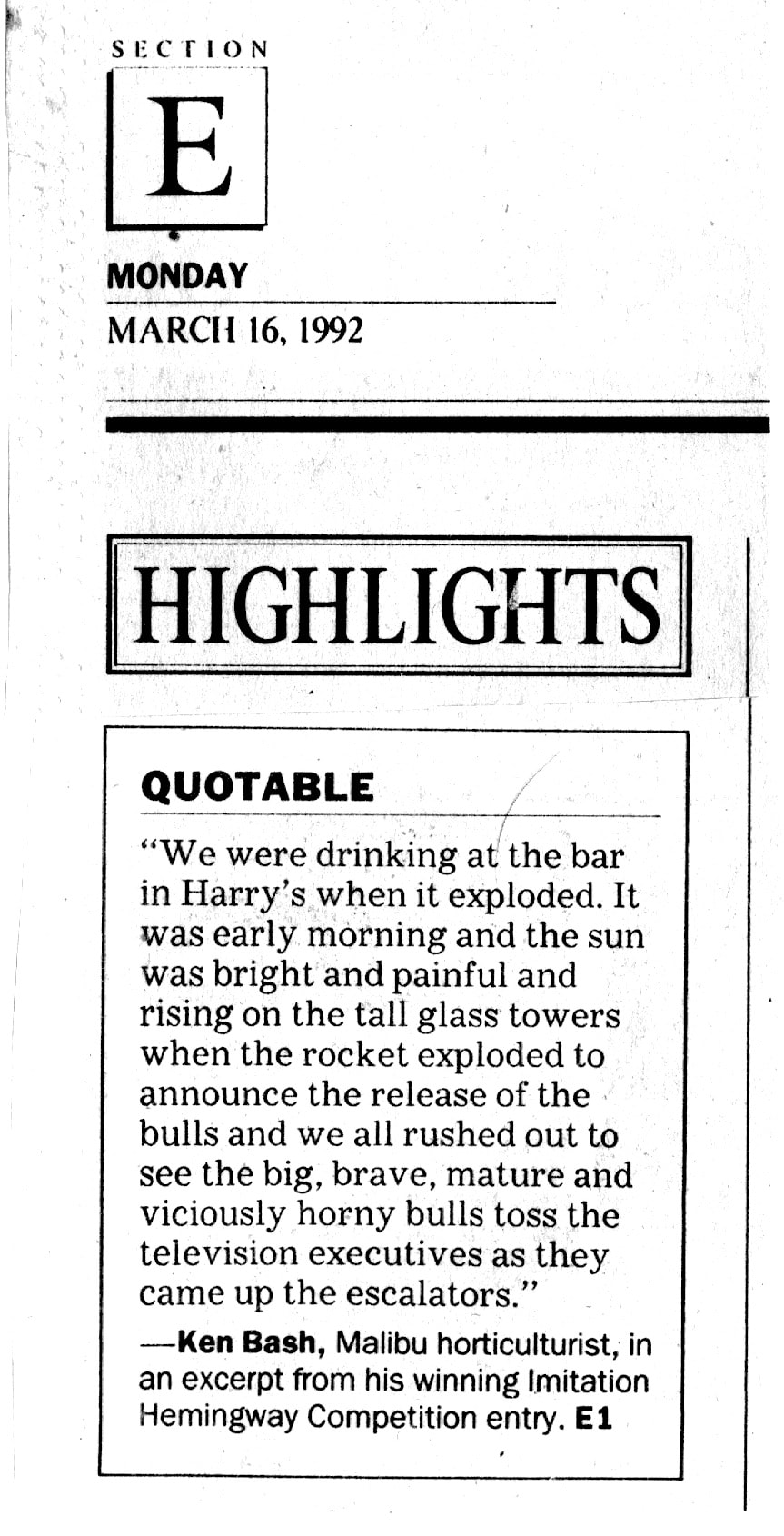